Live at The Electric Theatre Co, Chicago, May 1968


These previously unreleased live May 1968 recordings from The Electric Theatre in Chicago can be regarded as works in progress.

In real time in front of an audience, Tim (accompanied by an unidentified bass player and his trusty sideman Carter C.C. Collins on congas) is basically thinking out loud as he moves from one musical and/or lyrical idea to another during this Chicago performance. Mastered by Bill Inglot , the songs include early versions of “Sing A Song For You”, “Gypsy Woman”, “Dolphins” and “Happy Time”. The booklet features annotation by Pat Thomas , based on interviews with Buckley’s musical associates Lee Underwood and Larry Beckett . 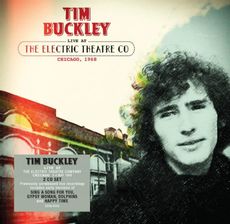