Whilst the future of the world and its current cosmic wasteland might be up in the air, the orielles’ new album has its feet beating out a much-needed four to the dancefloor, defiant in the face of existential dread.

“disco volador” sees the 4-piece push their sonic horizon to its outer limits as astral travellers, hitching a ride on the melodic skyway to evade the space-time continuum through a sharp collection of progressive strato-pop symphonies. The energy on this album comes from the melodic fission of tension and release. recurring motifs explore space, not only of earth’s celestial atmosphere, but also what happens within the gaps and how sound manipulation has the power to carry, or displace, its listener. FFO Girl Ray, Khruangbin, Chic, Alvvays. “Disco Volador suggests the euphoria of whooshing through infinite space past astral displays of unimaginable beauty via a blend of disco funk, dream pop, electronic exotica and ‘70s highlife” 7/10 - Uncut 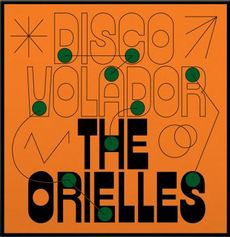