HYMNS TO THE STONE*


Leaves of Mellow Grace,” the opener of Hymns to the Stone, which rolls out its nod like a clarion, finding Acrimony — the five-piece of vocalist Dorian Walters, guitarists Stu O’Hara and Lee Davies, bassist Paul Bidmead and drummer Darren Ivey — immediately putting the groove first in a way that few acts at the time had understood how to do.

Their influences were varied, from ’70s rock to trance techno, but their riffs were undeniably heavy, with lyrics exploring the isolation of their hometown and the same kind of disaffection that once launched Black Sabbath to the outer reaches of doom from a blues rock beginning. Acrimony started out more as death metal or at least death-doom, but Hymns to the Stone was a point of discovery for them in terms of claiming their identity, and whether it’s the nodding pub-homage “The Inn” or the myth-creation they engaged with “Urabalaboom,” the sonic drawl and spacey push of “Spaced Cat #6” or the glorious noise-wash jam of “Whatever” ahead of brash closer “Cosmic AWOL,” Hymns to the Stone is a record that has been persistently undervalued, not just for what it set in motion in terms of Acrimony‘s alltoo- short tenure as a band, but on the sheer merits of its material. 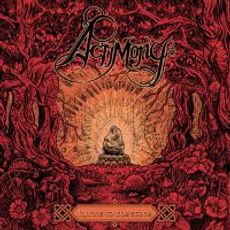