Our favourite porcine stoner-noise rockers return with fists full of riffs, rage and rhythms that prove the epic, ear-clattering majesty of their first two records to be no fluke.

Incisive in its riff-driven attack, infectiously catchy in its songcraft and more intrepid than ever in its experimental approach, ‘Viscerals’ is the sound of a leaner, more vicious Pigs. the personality of this band has never been stronger, whether on the Sabbathian and philosophical warcry of ‘Reducer’, the debauched, Jane’s Addiction-tinged swagger of ‘Rubbernecker’, the Melvins vs Sonic Youth demolition derby of ‘New Body’ or even the demented MBV-meets-Twisted-Sister party-banger from hell that is ‘Crazy In Blood’. “'Viscerals' is not an album for the fainthearted – or for closed minds – but it would be a real surprise if a British band produces a better rock album in 2020” 9/10 – louder than war.

Ian says: “Picking up pretty much where they left off, but with added focus & double the fun. Still the best way to scratch that Sabbath itch.” 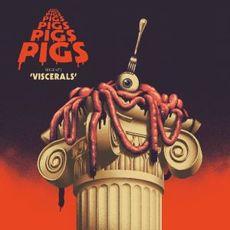