Viciously cynical but with an unstoppably infectious fist-in-the-air sensibility, these young Camberwell-based upstarts have more than delivered on their early promise with this debut lp.

sports team are a band of six singular characters who have been variously described as one of the most raucous, electrifying and chaotic acts in the uk. the band have consistently set themselves apart from the acts they came up playing with, showing an intoxicating ambition, and their debut album 'deep down happy', looks set to deliver on all bold claims, and confirm their place at the head of a group of young guitar acts. FFO: Slaves, Shame, Arctic Monkeys, The Cribs, The Vaccines. “‘Deep Down Happy’ is destined for a spot on numerous end of year top-10s.” 4/5 - Narc Magazine 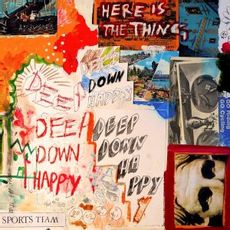