combining minimalist post-rock with lush folk strings, the london eight-piece have bowled us over with this brace of atmospheric pastoral wonders.

initially evolving out of weekly improvisation sessions, the group brought together shared influences in, and experiences of playing, midwestern ‘emo’ guitar music, Appalachian folk, minimalist classical and various forms of dance music. Reiterating, deconstructing and re-building the same small handful of songs over and over again, the group slowly expanded their on-stage members before playing their debut show as caroline in 2018. we reckon you'll love this if you like dirty three, tortoise and anything related to Jeff Mueller. “Dark blue is a place where strings and hushed guitars merge beautifully. It’s sweeping, pastoral and hypnotising. For fans of Godspeed You Black Emperor, Mike Leigh Soundtracks and Mogwai” - rough trade. 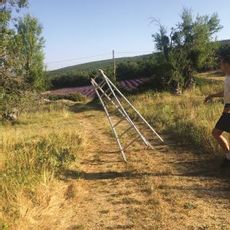