having been turned on to the music of lost bluesman alvin snow, aka dyin’ dog, the group presents their interpretations of all ten of snow’s known recordings, alongside several original compositions inspired by his work.

This tribute to the obscure blues musician is a collision of the pain of the wounded bluesman and the subversive and unpredictable sound of this most unique of bands. The album also sees the residents perform alongside several collaborators, old and new. eric drew feldman, nolan cook, black francis, carla fabrizio, sivan lioncub and peter whitehead all contribute. ***the 2cd, 26 track set includes 16 new residents recordings – their dyin’ dog interpretations plus 6 new songs inspired by dyin’ dog – plus the 10 original dyin’ dog demos. The accompanying extensive hardback book package includes the story of dyin’ dog, the residents’ dyin’ dog biography and a wealth of related imagery.*** 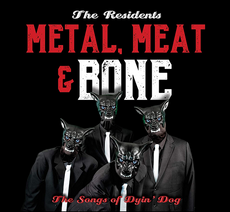