The last year of recordings of the classic line up of T Rex (Marc Bolan, Steve Currie, Mickey Finn, Bill Legend) and with Tony Visconti producing.

Recorded in the U.S & Germany less than a month apart. ‘Truck On’ having been demoed acoustically in Tony Visconti’s flat with wife Mary ( Hopkins ) harmonising in October 1971 it took 20 months to actually record the song, which was then issued as a single within the next 5 months in November 1973 and was the first T.Rex single to not enter the top 10 stalling as it did at 13 . This version is less polished and much more appealing to fans than the released version it’s been argued. Satisfaction Pony a re- recorded final version ended up on the B side of the Teenage Dream single in February 1974 These recordings from Marc’s own tapes (part of the material stolen from his & Gloria s house and now repatriated with the estate) 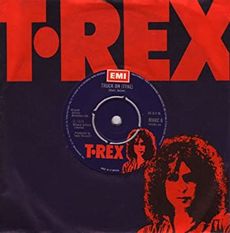