Very few artists have attempted, or succeeded, in improving the standard template for classic blues records set some 50 years ago in the golden age of Muddy Waters and Howlin’ Wolf.

Buddy Guy is one of those guys that had a big influence on the development of the blues during the centuries. Damn Right, I’ve Got the Blues is the Grammy Award winning comeback album by the blues master, released in 1991. Legendary musicians like Eric Clapton, Jeff Beck, and Mark Knopfler all turn up on this album. This album put the spotlight back on Buddy Guy and deservedly so. 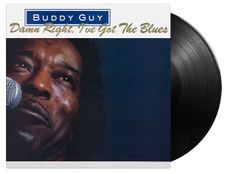