originally released by Victory Music in 1991, Tin Machine II is the second and final studio album by Tin Machine.

After this album and the supporting tour, frontman David Bowie resumed his solo career. Tin Machine II’s reputation has only increased over the years. Uncut magazine placed the album on their list of 50 Great Lost Albums (their list of great albums not currently available for purchase), calling the album “extraordinary”. As with all Bowie albums, there are plenty of strong tracks here to make this a must have. 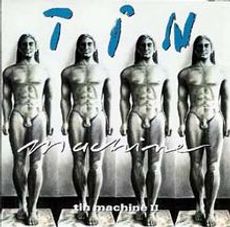