OFFICIAL EXPANDED REMASTERED EDITION OF THIS CLASSIC ALBUM ALL TRACKS NEWLY REMASTERED FROM THE ORIGINAL MASTER TAPES INCLUDING BONUS TRACKS  FEATURING EIGHT BONUS TRACKS ALONG WITH A LAVISH BOOKLET WITH FULLY RESTORED ARTWORK, PHOTOS, MEMORABILIA & ESSAY The album, originally recorded in 1977 – 1978 and released in 1979, was the band’s final masterpiece for CHARISMA records that perfectly embraced the influence of the musical New Wave to deliver one of the most effective albums released during Calvert’s tenure with Hawkwind.

This expanded edition features eight bonus tracks, including the classic ‘We Like to Be Frightened’. Also features such fabled tracks as ‘Robot’,‘High Rise’, ‘Jack of Shadows’,‘Death Trap’ and ‘PXR 5’. This reissue has been remastered from the original master tapes. 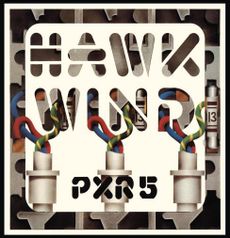