Their music is known for its brand of "minimalistic psychedelia". Spacemen 3 had their first independent chart hits in 1987, gaining a cult following, and going on to have greater success towards the end of the decade. However, they disbanded shortly afterwards, releasing their final studio album post-split in 1991 after an acrimonious parting of ways. They gained a reputation as a 'drug band' due to the members' drug-taking habits and Kember's candid interviews and outspoken opinions on recreational drug use. Kember and Pierce were the only members common to all line-ups of the band. Both founding members have enjoyed considerable success with their respective subsequent projects: Sonic Boom/Spectrum and Spiritualized. ‘Threebie 3’ is a live Spacemen 3 recording featuring performances from a 1988 gig at Melkweg in Amsterdam which were excluded from the live ‘Performance’ album. It was originally released in a strictly limited edition of 1,000 numbered copies which were only available via a mail order offer that came with the seminal and critically acclaimed Spacemen 3 ‘Playing with Fire’ studio album released in 1989 which went to number 1 on the indie charts. Out of print for more than 30 years and now re-mastered by John Rivers at Woodbine Street Studio especially for vinyl release for RSD 2020. Previously only released on limited edition black vinyl in 1989. 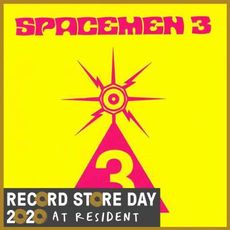