IAN RECOMMENDS:"One of the most intense, thrilling and fun live bands ever to have connected beer bottle with guitar, can’t wait for this".

BUDDY RECOMMENDS:"Easily one of the most intense and formidable live acts I've witnessed - If I can't go to shows currently I'll happily stand in my living room, this blaring and a warm beer in hand."

In November 2019, Girl Band played back to back sold out shows at Dublin’s iconic Vicar Street, this was following the release of long awaited second album ‘The Talkies’ hailed as “more abstract and more focused than their debut” and a sold out East coast U.S & European tour. Recognised for their ferocious live shows which have been described as chaotic, electrifying and “genuinely dangerous, like one last rave before the apocalypse”, these shows were highly intimate and intensely sought after creating an air of you had to be there. This is their first ever live vinyl and features tracks from their whole repertoire, some of which have only been performed a handful of times. 700 for UK & Ireland 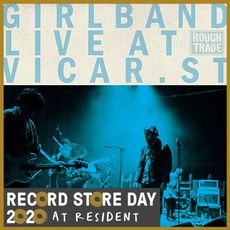