largely recorded while his typical instruments were in storage, sufjan’s eighth record is a swooning record of blissful electronic pop that had us falling in love with his music all over again.

there’s a distinct spirit of lana del rey presiding over the glacial dreaminess of sufjan’s ecumenical opus; one that fits this electronic dimension like a glove. “Whatever perspective he may be singing from, he sounds tapped into something elemental, filled with purpose and clarity, following wherever his vision leads. He sounds like himself” 7.0 – pitchfork. “I was rendered wonderfully weightless by a journey that delivered whole galaxies of nuance in a universal context” 5/5 – the independent.

Juliet says "Similar dreamy vibes to Planetarium, but Video Games is a surprise breakout bop - He's a man of many hats that'll take you to church :)" 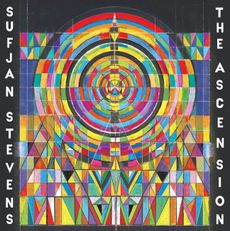