Is this the best metz have sounded since their debut? It just might be – unrelenting drums and guitar attacks, striking lyricism and the boundless energy that’s been their hallmark since they first burst onto the scene.

“Change is inevitable if you’re lucky,” says guitarist/vocalist Alex Edkins while talking about Atlas Vending, the fourth full-length album by Toronto’s METZ. “Our goal is to remain in flux, to grow in a natural and gradual way. We’ve always been wary to not overthink or intellectualize the music we love but also not satisfied until we’ve accomplished something that pushes us forward.” The music made by Edkins and his compatriots Hayden Menzies (drums) and Chris Slorach (bass) has always been a little difficult to pin down. Their earliest recordings contained nods to the teeming energy of early ‘90s DIY hardcore, the aggravated angularities of This Heat, and the noisy riffing of AmRep’s quintessential guitar manglers, but there was never a moment where METZ sounded like they were paying tribute to the heroes of their youth. If anything, the sonic trajectory of their albums captured the journey of a band shedding influences and digging deeper into their fundamental core—steady propulsive drums, chest-thumping bass lines, bloody-fingered guitar riffs, the howling angst of our fading innocence. With Atlas Vending, METZ not only continues to push their music into new territories of dynamics, crooked melodies, and sweat-drenched rhythms, they explore the theme of growing up and maturing within a format typically suspended in youth. 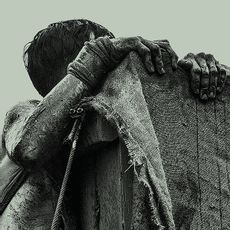