Nothing Changes Under the Sun (20th Anniversary Reissue)


Memphis Industries will reissue 'Nothing Changes Under the Sun” by the artist Blue States to mark its 20tH year anniversary.

It will be only the second vinyl pressing of the album since 2001. Do you know that feeling when you first hear music, and you realise that you may have stumbled across something that will become a part of your life forever? Music that gradually unlocks those treasured endorphins and lets them loose to run throughout your very being. Blue States ‘ Nothing Changes Under the Sun’ is one of those records, sounding as timeless and out of time today as it did on its first release twenty years ago. ‘Nothing Changes...’ was created by Andy Dragazis, working in his bedroom, locked away with a rudimental little set up a sampler, a sequencer, and a few keyboards. Andy confesses that he was far from certain what he was working on, but, encouraged by fledgling label Memphis Industries, he released a series of 12” EPs in 1998. 99, each to increasing acclaim Complete artistic freedom can lead to self indulgence and musical culdesacs, but by the time ‘Nothing Changes...’ was released in September 2000, the results of Andy’s experimentation had been honed, refined into something very special indeed. A record that held its secrets close, ‘Nothing Changes...’ set Blue States apart from the downtempo contemporaries that were flourishing at the time, full of sweeping melancholia and glorious retro - futurism. Purchases via indie stores come with “Trinity Tapes a bonus CD of six newly mixed, previously unheard songs recording around the “Nothing Changes ...” sessions. Whilst stocks last. Praise for ‘Nothing Changes...’ “If the art of pop is to stay ahead of the game, Blue States should be leading the field” – The Guardian “Blue States have a scale and grandeur seldom heard in modern music” –The Observer 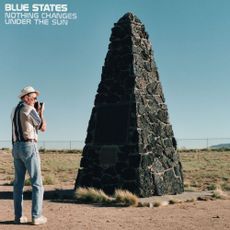