‘Acoustic’ consolidates Sangar ‘s position as Mali’s leading opinion-maker, established with her 250,000-selling 1989 debut Moussolou, which did much for the feminist cause in West Africa. Oumou’s capacity to confront suffering whilst preserving her connection to Malian values is reflected in two additional tracks added to ‘Acoustic’. ‘Saa Magni’, which laments the passing of Amadou Ba Guindo (member of the Orchestre National Badema), and ‘Diaraby Nene’ (lifted from Mous-solou) in which Sangar ‘s lyrics dared to detail her first physical encounters. 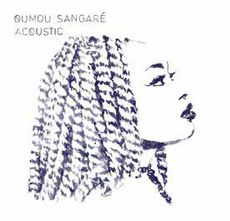