“The Wanderer” was released the year after the ‘Disco Demolition Night’ event, which was held, ironically, two days before ‘Bad Girls’ became a US #1 single and despite introducing more rock- infused dance/pop tunes - copied by many Artists through the 1980s - the album - which despite being another US Billboard Top 20 album with a #3 Single - has been under-appreciated.

..until now!  At the same time, the Italian-American aggregation, Change, broke-out from the clubs and into the charts worldwide, with their sublime, slick and classy productions, which also featured and introduced the wider-world to Luther Vandross. 2020  For this 40th Anniversary edition, “The Wanderer” has been re-evaluated and now fuses-together 1980 with 2020, showcasing the strength of the album’s songs, with brand new remixes by the Italian production team behind Change and Artist/Producer/Remixer Le Flex.  After years of silence, in 2018 Mauro Malavasi and Davide Romani resurrected Change with an album that retained their classic sound but with a contemporary twist, produced and mixed with the inhouse production team, Figo Sound, who were invited to remix two of Donna’s tracks.  Figo Sound has created two contemporary radio-friendly tracks, with ‘The Wanderer’, retaining its shuffling beat and ‘Looking Up’, which firmly plants Donna Summer back on the Dancefloor! 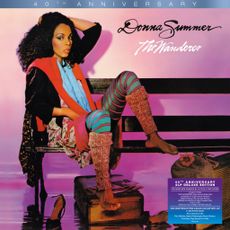