Gondwana Records are delighted to announce the 6th release of our '7" Series', our first ever 7" vinyl collection series.

Featuring bespoke artwork from Gondwana Records designer Daniel Halsall, cut at Calyx in Berlin, and manufactured at Optimal. This one is limited to strictly 500 copies and housed in a reverse board printed sleeve with classic 'dinked' centre holes. Last Words and Fanfares were GoGo Penguin's breakthrough tracks, taken from their first album, Fanfares, they first introduced the band's trademark mix of jazz, dance and classical music influences to the world outside of Manchester. For this this very special release we feature two breathtaking alternate versions. Recorded in 2013 they feature the now classic line-up of GoGo Penguin with pianist Chris Illingworth, drummer Rob Turner and bassist Nick Blacka (replacing Grant Russsell) together with producer Joe Reiser - they are released here for the first and only time. 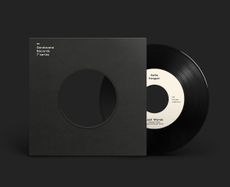