If ever there was buried treasure, a hidden gem, lurking on The Chills’ Martin Phillipps’ shelf of good things, then 1992’s ‘Soft Bomb’ is it.

Back on vinyl for the first time in almost 3 decades, the potency, poetry and passion of this album is lovingly repackaged by Fire Records. After the band’s major label debut two years earlier, ‘Submarine Bells’ (Slash/Warner Brothers), and its critical acclaim, the band dissolved leaving Phillips to follow it up alone. The album is a roller coaster 17-song, 51 minute trip, a conceptual classic that embraces styles and genres and drops one-liners of personal experience, grandiose longing and some beautifully observed moments, a record that inevitably split opinions as it moved away from ‘Submarine Bells’ successful sound and arrived amid turbulent times. “’Soft Bomb’ was The Chills' finest hour,” claimed Perfect Sound Forever a few years back, “For the recording, Phillipps took advantage of having the back support of a major label and brought in giants of contemporary American music like Van Dyke Parks and ex dB's Peter Holsapple as collaborators, producing a conceptual song-cycle meisterwork.” Phillipps took a leaf from Van Dyke Parks eccentric storytelling style, dropped in myriad styles; there was jangle, Phillipps’ clever lyrics, a “drunken piece of music hall” (AllMusic), an offbeat homage to Randy Newman, some grown up licks, three thematic interludes, Phillipps’ trademark quirky indie pop and much more. Van Dyke Parks contributed haunting strings to the filmic ‘Water Wolves’, it’s a symphonic, sideways look at the world; baroque on a roll. In the mix it adds to the drama of the piece, the penultimate moment before the final ‘Soft Bomb’ interlude fills the space and proceedings evaporate. “’Soft Bomb’ was The Chills' finest hour.” Perfect Sound Forever. 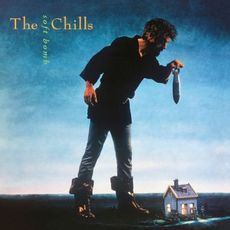