***We have some very limited, 1 per customer goodie bags alongside this release! First come, first served! Not all shops have them, so go go go Existing preorders will automatically be assigned a goodie bag***

Twentysome years ago, a brother and sister climbed into the third floor attic of their Southwest Detroit family homestead and bashed out a primitive cover of David Bowie’s “Moonage Daydream,” sparking something in both of them and leading them to take their simple guitar-drums-voice approach to a local open mic night on Bastille Day. In what feels like a whirlwind, they record and release two 7-inch singles for a local indie label. A not-so-local indie offers to put out a full-length album. They start touring. Another album. More touring. Another album. Folks REALLY start to pay attention. Crazy touring, more albums, accolades, wildest dream after wildest dream coming true. “World-renowned” becomes an appropriate descriptor, as does “long-building overnight sensation.” The same hard work and dedication that The White Stripes exhibited from the onset of their existence is what has been poured into The White Stripes Greatest Hits. In an era of streaming where the idea of a “Greatest Hits” album may seem irrelevant – that an act’s most streamed songs are considered their de facto “hits” – we wholeheartedly believe that great bands deserve “Greatest Hits” and that a large part of Third Man Records’ and The White Stripes’ successes have been built on zigging when the rest of the music business is zagging. Thus, for a great band with great fans, a greatest hits compilation for The White Stripes is not only appropriate, but absolutely necessary. 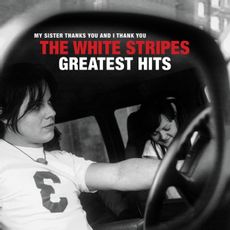 2. The Big Three Killed My Baby

3. Fell In Love With A Girl

5. I'm Slowly Turning Into You

6. The Hardest Button To Button

9. Dead Leaves And The Dirty Ground

13. I Just Don’t Know What To Do With Myself