The film chronicles the Jimi Hendrix Experience’s storied visit to Maui and how they became ensnared with the ill-fated Rainbow Bridge movie produced by their controversial manager Michael Jeffery. Directed by John McDermott and produced by Janie Hendrix, George Scott and McDermott, Music, Money, Madness . . . Jimi Hendrix In Maui incorporates never before released original footage and new interviews with first-hand participants and key players such as Billy Cox, Eddie Kramer, Warner Bros. executives and several Rainbow Bridge cast members, as well as its director Chuck Wein. Their fascinating account tells the definitive story about one of the most controversial independent films ever made. The documentary sets the proverbial stage for Live In Maui – the two full Jimi Hendrix Experience sets, including breathtaking renditions of crowd favourites like “Foxey Lady,” “Purple Haze” and Voodoo Child (Slight Return),” as well as then-unreleased songs like “Dolly Dagger” and “Freedom” that showcased the new direction Hendrix was moving toward. The Blu-ray will include the full documentary as well as bonus features including all of the existing 16mm colour film shot of the two performances that afternoon mixed in both stereo and 5.1 surround sound. Included in the package will be Live In Maui – both of the aforementioned sets spread across 2 CDs or 3 vinyl LPs, newly restored and mixed by long-time Jimi Hendrix engineer Eddie Kramer, and mastered by Bernie Grundman. “Voodoo Child (Slight Return)” from this historic concert is available today on streaming services; those who pre-order the package will receive a digital download of the track. 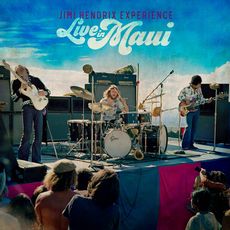