Ghost is brand new music from Gerry and proof that you can’t keep a great songwriter down.

After ‘The Bonny’ went straight to Number 1 in the UK and Ireland in April, like everyone else, Gerry had to reschedule his 2020 dates until next year. With over 200,000 tickets sold in the UK and Ireland, he was preparing for his biggest ever tour, one of the biggest in the UK, firmly establishing him as one the top live artists in the country. And he was making waves abroad, set to tour in the US, Australia and throughout Europe. With all that on hold until 2021, he took stock and kept creating with more new music expected next year. The Bonny is already the third biggest selling UK album released in 2020 and the Definitive version also includes new recordings of two fan favourites that can finally be included on an LP. “Been waiting a long time to get those tunes back,” explains Gerry, “Should have been on the first album but that's what happens when you trust the wrong people.” “Ghost was written around the same time as Kampfire Vampire, Fickle McSelfish, and Roll the Credits so it’s good to have them all on the same record.” Ghost is classic Gerry and illustrates why he has become one of the most popular artists in the UK and beyond – lyrics sparking rich imagery, reminding the listener of their own life, while deftly telling his own story (“turn into a ghost if you want to disappear, cry tears for someone else some place where I can’t hear”). Anthemic hooks melt with bittersweet sentiment. Certain fan-favourite, Ghost is made for those days when we are all back together and singing our hearts out alongside him. 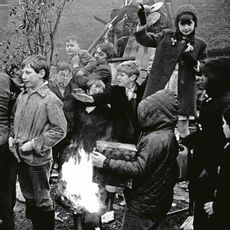