Green EP is the second Laundromat (AKA Toby Hayes) EP this year, after Blue which came out in April.

Laundromat has previously received support from Steve Lamacq, Marc Riley, DIY, Dork among others. Laundromat, the new project from Toby Hayes has been a long time in the making. Hayes admits as much, recalling a process that has taken "years" to bear fruition. The resulting Ep’s showcase a musician who has earned his stripes in the DIY scene. Bureau De Fatigue, the first single to be taken from Green premieres on Lauren Laverne's show on BBC 6music today. Lead Single, Bureau De Fatigue, according to Hayes, came around "completely by accident". He adds " I lifted the guitar parts from another demo and that was that. All came together really easy, for a change. I was really excited by the idea of really pushing the limit in terms of how much repetition I could get away with. I think I want to explore taking it even further with my next record. It’s a bit of a favourite in the practice room, has a real vibe when we get it right. Lyrically it’s a snapshot of an inner-monologue, on one of those days where you’re being particularly hard on yourself. Ocular migraines and Impostor syndrome, too - you know, all the good shit" Elsewhere on the EP, Bug-Eyed recalls The Beta Band at their most tender, all repetitive melody and lo-fi longing. Nein strikes a more visceral tone, a big rock riff slowed down to a haze with the "We having fun, or what?" refrain permeating throughout. Lyrically the project explores the end of the world, panic attacks, political figures that don’t represent the people that elected them, the preciousness of friendship, binge drinking, mental health and the time Hayes got ‘catfished’ - for nearly 7 years. Influences are broad, ranging from Broadcast, Jaki Liebezeit, Jason Albertini, Madlib to Gonjasufi. Kim Deal stands out as major inspiration. Film is also a huge source of intrigue for Hayes "I find a lot of inspiration in film. Repo Man (1984), Deep End (1970), Punch-drunk Love (2002), and Alice in the Cities (1974) in particular" he says. Hayes finds salvation in the intimacy of bedrooms recordings, " I love the sound of them. There’s something special there that I will always love, the sound of someone exploring their imagination, performing to themselves." Lo-fi may be the guiding force, but after an eventful and painful few years Laundromat is ready to embrace positive change and seek catharsis with these new recordings. 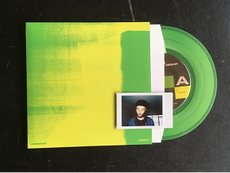