The Congos were formed by Cedric Myton (born 1947 St Catherine, Jamaica) and Roydel ‘Roy’ Johnson (born 1943 Hanover, Jamaica), around the mid-seventies, a time when the Rasta message coming out of Kingston and other pockets of the Jamaican Island was at its most prominent.

Cedric Myton’s singing career began back in the rocksteady era in Reggae’s musical story. He formed the ‘Tartans’ group taking lead vocal duties alongside Devon Russell, Prince Lincoln Thompson and Lindbergh Lewis. They cut ‘Dance All Night’ (1967) and ‘Coming On Strong’ (1968). The line-up reduced to a two piece, Cedric and Devon Russell, when tracks like ‘What a Sin Thing’ and ‘Short Up Dress’ were cut. This line-up became the Royal Rasses, Cedric formed The Congos, on meeting Roydel Johnson. Roydel previously sang as a member of Ras Michael and the Sons of Negas, cutting such tracks as ’Go To Zion’ (1973). As we can see Cedric’s and Roydel’s Rasta roots were firmly in place by the time they had formed The Congos sometimes called ‘The Congoes’. The Congos possess what all bands look for,that unique sound that draws the listener to them.Lead singer Cedric Myton’s style and phasing, with his distinctive Falsetto voice makes this just the case.Built on a foundation of classic rhythms and with the aid of then Producer, Lee Perry, the groups statement of intent was laid down with one succinct message. The Congos mighty 1977 ‘Heart of the Congos’ album, is quite simply one of the best reggae albums ever recorded. Producer Lee Perry had wanted to record a classic Jamaican vocal group in his newly built Black Ark Studio. The voice of Watty Burnett was added at the time to cover baritone vocal duties. The studio after various changes in equipment etc. was finally finding its way. A sound built in Lee Perry’s back yard in Cardiff Crescent, Washington Gardens, Kingston, but existing until then in Mr Lee Perry’s mind. The album they cut would be the defining group release to come out of The Black Ark studios, when the vital elements, vibes, musicians, songs and singing would gel to form ‘Heart Of The Congos’. Come the time of it’s release 1977, Lee Perry was in dispute with Island Records and opted to release the record on his own ‘Black Art’ label. Without the high-profile push of a major label, the record undersold and caused a split between producer and band. Under different circumstances maybe this album would be sitting in thousands of homes alongside the Bob Marley, Culture, Burning Spear releases. Cedric Myton went on to release albums with the French arm of the CBS label and Roy Johnson records and tours as Congo Ashanti Roy. Cedric Myton the central force carries on the mantle of the Congos and we at Kingston Sounds are proud to pick up the story with another set of vocal statements, which sees Cedric cut some of his finest tunes. Helped along by another reggae legend Brent Dowe, lead singer of the Melodians (Rivers of Babylon), over some classic 1970’s rhythms. Yet again we find that magic formula of strong statements working alongside classic rhythms making the balance work. The Rasta message is still strong on modern classics like ‘King Rastafari Is His Name’, ‘Rasta Congo Man’ and the injustices of the world dissected in tunes ‘Some A Thief’, ‘Watch & Pray’ and the prophetical, ‘Citizen Of The World’. Once touched by magic it does not fade away, but resurfaces as it has with what we believe to be some of the Congos most heartfelt and meaningful set of songs ...... Let the feast begin. 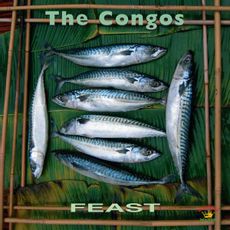