Mental as Anything, affectionately known as ‘The Mentals’, were one of Australia's most popular bands in the 1980s who achieved worldwide recognition after the international smash hit single ‘Live it Up’ • ‘Live It Up’ was featured in the Crocodile Dundee film and soundtrack and reached #3 in the UK charts in 1987.

In 2020 the song was adopted by football club Glasgow Rangers as their clubs anthem which saw the song reach #1 in the UK iTunes chart • This compilation features all the bands greatest hits including; ‘Too Many Times’, ‘If You Leave Me Can Can I Come Too?’, ‘The Nips Are Getting Bigger’ and international hit ‘Live It Up’ • This double LP compilation is presented in a gatefold sleeve, with original artwork produced by the band. Pressed on 2x 140g and available on coloured vinyl for the first time (red and white) 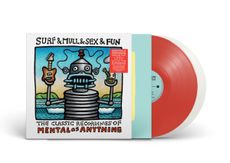