The release of Ennio Morricone’s score to I Malamondo is the next instalment in the “Morricone Segreto” series of releases which includes the track L'Ultima Volta (The Last Time), chosen by Wes Anderson for his forthcoming film The French Dispatch, starring Benicio del Toro, Adrien Brody, Timothée Chalamet, Bill Murray and Owen Wilson – set for release this year A cult-film documentary from 1962, directed by Paolo Cavara, Gualtiero Jacopetti & Franco Prosperi, this film saw great international success, winning awards at the 15th Cannes Film Festival, and is often seen as the film that gave real life to the cinematic strand of sensationalist documentaries – termed Mondo-Movie.

The soundtrack has a cult following also; with innovative and modern its influences span from jazz to exotica. This Grammy Award-winning soundtrack was nominated for an Oscar in 1963. One instrumental track – Modelle in Blue / Models in Blue – achieved wider fame when it became the hit track "More", covered by the likes of Nat King Cole, Aretha Franklin & Frank Sinatra (with over 70 million records sold). Continuing the "Morricone Segreto" series of unearthing hidden and underrated soundtracks of the late Maestro – the next release is the score of I Malamondo. A strange, off-beat mondo-movie about the youth of the early 1960s, directed by Paolo Cavara. This is one of Morricone's earliest works, and possibly one of his most eccentric and colourful scores. Quirky and vivid, this soundtrack spans many genres – classical, bossanova, jazz, latin and features the renowned vocals of "I Cantori Moderni di Alessandroni" and "I 4+4 di Nora Orlandi" – two choirs that embody the spirit of Italian soundtracks of the time. The score has been carefully restored and remastered from the original master tapes and includes 7 unreleased pieces (9 on the CD/Digital editions), including 2 tracks released on vinyl for the first time. This release also includes the track L'Ultima Volta (The Last Time), which has been chosen by Wes Anderson for his forthcoming film The French Dispatch, starring Benicio del Toro, Adrien Brody, Timothée Chalamet, Bill Murray and Owen Wilson – set for release in May 2021 (TBC) 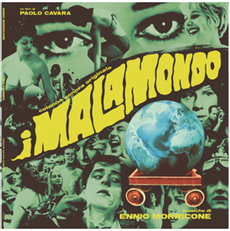