Playful, potent and bursting with potential, 'Smokehole' marks Sad Night Dynamite's arrival as one of the UK's most exciting new bands.

Flitting between voices, a Dre Dre-inspired beat and the minimalist atmosphere of UK rap, 'Smokehole' - say the duo - is the suitably-strange sound of "getting lost in your own thoughts. We wanted it to feel as though you’re sort of sinking through your own brain - the further into the song you get, the deeper into your own head you fall, that’s kind of why the song gets weirder and weirder. We wrote it whilst both hypnotised by a zoltar, so beyond that it doesn’t make a lot of sense." The track lands alongside a brilliant stop-motion video directed by Edie Lawrence, which explores Sad Night Dynamite's visual world - introduced with their 'SND:0001' visual - via another limo trip (this time towards fame, a fairground, and a hellish headline festival slot). 'Smokehole' offers a hazy view of Sad Night Dynamite's debut mixtape, and a porthole into two of the more compelling new musical minds in the UK. Equal parts light and shade, dystopia and fantasy, it's a project as much about the pleasures of getting lost as it is the at-times nightmarish world you dream of getting lost from. Epic first single 'Icy Violence' - loosely set on a beach, but also based on a kidnapping - established the band's sometime-surreal storytelling (its followup, 'Killshot', was paired with a visual evoking the all-too-real reality of a surveillance state). That rare act who are as at ease with elements of G-Funk, the psychedelia of The Avalanches or classic, Tarantino-esque cinema scores as they are the loaded atmosphere of London subculture, the genre-bending pop at the heart of Sad Night Dynamite's debut mixtape also begins to tell their own story for the first time. SND are the the product of one charged, brother-like friendship of Archie and Josh, a duo whose formative (and slightly feral) upbringing near Glastonbury eventually saw them start the band online, separated at university. What started out as a surreal exercise in escapism has, for Sad Night Dynamite, become all the more important now they complete this debut mixtape. "We love artists who build something bigger than themselves: songs to explore and be lived in." Although launched in a pandemic, Sad Night Dynamite already stand out in all the right ways for a breakthrough 2021. The band were spotted on socials in the studio late last year with FKA Twigs, as well as landing early shout-outs from the likes of Shygirl, Jeshi, and being named part of Reprezent Radio's Class of 2021. Continuing with 'Smokehole', Sad Night Dynamite's debut, self-titled mixtape introduces a band set to deliver a sound as explosive and evocative as their name implies- and just when we need it the most. 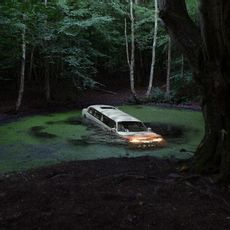