Now with its eighth release Matthew Halsall's Manchester based Gondwana record label shines a light on another of Manchester's well kept musical secrets, the expansive, brilliant piano trio GoGo Penguin. Featuring pianist Chris Illingworth, bassist Grant Russell and drummer Rob Turner (all still in their twenties), GoGo Penguin, draw on a heady brew of influences from Aphex Twin to Brian Eno, Debussy to Shostakovich and Massive Attack to EST. GoGo Penguin who have already developed a growing cult following in the North West as well as turning in storming performances at the Gateshead International and Manchester Jazz Festival's first came to Halsall's attention when he heard them at a friends night (Norvun Devolution) at the Roadhouse in Manchester. He was immediately drawn to their sublime collective empathy and the seamless fusion of jazz, classical and electronica influences in their music. 'I was blown away the first time I heard them, for me tracks like Last Words and HF are modern anthems and I knew immediately that I wanted to release their music". I am very proud to welcome them to the Gondwana label" GoGo Penguin met whilst studying music at the RNCM in Manchester. After doing frequent gigs together with various other bands and musicians they started jamming together and started creating new music. They had no specific sound in mind, but just wanted to be free to create freely and honestly. The new band quickly became a vehicle to combine all the best bits from the music they where influenced by and loved. Individually Illingworth brings a lyrical and melodic style influenced heavily by classical piano music and electronica. Turner brings a driving modern style of drumming influenced by jazz, electronica, ambient, classical and dance music. Russell brings a gritty energetic double bass style influenced by the likes of Charles Mingus but also more modern electronic producers. The band's modus operandi is to have one of them bring an idea to rehearsal. Then there's a lot of experimentation, they try out as many different ways to play the piece as they can think of, until it begins to sound like something they all like. Fanfares opens with the wistful tribute Seven Sons of Bjorn, written by pianist Illingworth as an act of catharsis shortly after the untimely death of Esbjorn Svenson. The dreamy Last Words was written by drummer Turner and is inspired by Aphex Twin. The melancholic Unconditional is influenced by the harmonic ideas of Kenny wheeler and the Miles Davis cool school and melodic contours of Chopin, originally written by Russell as a piano ballad, Illingworth heard it and asked him to bring it to a trio rehearsal, the resulting arrangement is by all of them. The forceful title track Fanfares comes from an original idea that came to Illingworth while improvising with some ideas from the etudes of Ligeti and Einojuhani Rautavaara. Turner's drumming adds a real bounce and vibrancy to the music that propels this piece forward. I am That was wriiten by Turner and features a lot of unusual prepared drum sounds. Akasthesia started life as a reflective bass groove written by Russell after playing with the harmonics that he was hearing played by Jaco Pastorias, Miroslav Vitous and Anders Jormin. Finally HF opens with a distinctive piano riff written by Turner and developed by Illingworth. The middle section is a free drum and bass style collective improvisation and it is this unique ability to synthesis and develop each others melodic and harmonic ideas while drawing on music from classical to electronica that makes GoGo Penguin's music so enthralling and their debut album such a powerful opening salvo from a powerful new voice in UK music. 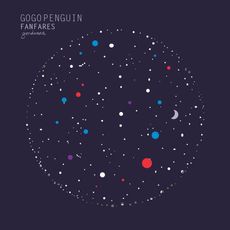