an astonishing album of classy pop songs, inspired by America’s most celebrated Outsider artist Henry Darger, whose lyrics have been set to music for the first time and brought into the present day, with additional help from the immense talent of Hannah peel.

Darger’s artwork has been lovingly and faithfully reproduced across all the OUTSIDER visual assets. OUTSIDER is the brainchild of Philippe Cohen Solal, the million-selling artist, producer and composer behind Gotan Project, who has been given exclusive, unprecedented access to Henry Darger’s life and works. He has brought together the Mercury Prize winning producer Mike Lindsay of acid folk group Tunng, to co-write and co-produce the album, bringing in the acclaimed Hannah Peel (The Magnetic North, Game Of Thrones) for the brass and strings instrumentation and backing vocals depicting Darger’s child characters the Vivian girls, and Adam Glover for the lush, crooning lead vocals, that reflect the inner voice of Darger himself through the original lyrics. 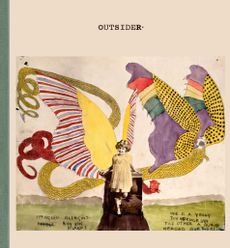