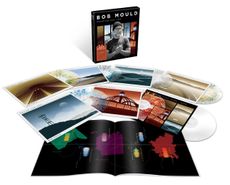 7 LPs including
•
6 studio albums District Line (2008), Life
And Times (2009), Silver Age (2012), Beauty
& Ruin (2014), Patch The Sky (2016), and
Sunshine Rock (
•
Each album is presented with brand new
artwork designed by illustrator Simon
Marchner and pressed on 140g clear vinyl
with unique splatter effects.
•
Bonus LP Distortion Plus: 2008 2019 which
features Mould’s collaborations with Foo
Fighters and Butch Walker plus the 2019
single ‘I Don’t Mind’. Pressed on clear vinyl
with an etched B side.
•
Mastered by Jeff Lipton and Maria Rice at
Peerless Mastering in Boston.
Plus
•
A 28 page companion booklet featuring:
liner notes by journalist Keith Cameron ;
contributions from J Mascis and Shirley
Manson ; lyrics and memorabilia.