never before released on vinyl and featuring crazy version of early live favourite Strawberry Sunday. Includes free download of original BBC files plus sleeve notes by Duglas – and a set of three postcards. "If I could be in any other band, it would be BMX Bandits." Kurt Cobain. Much loved in ultra-hip circles across the globe for 35 years, BMX Bandits are the extended musical family of Duglas T. Stewart. Many notable Glasgow-based musicians have passed through the group, among them Stewart’s childhood friends Norman Blake, who later founded Teenage Fanclub, and Sean Dickson and Jim McCulloch of the Soup Dragons, who also came out of Bellshill in Scotland. Both appear on these recordings, which are the band’s sessions from 1986 and 1987 recorded for long-term supporter Janice Long for the BBC. The first session, recorded before the band had released their classic debut single ‘E102’, features some their very earliest songs (among them a madcap version of live favourite ‘Strawberry Sunday’); Jowe Head, of Swell Maps and Television Personalities, is among those to appear on the second session, which includes a version of the jazz standard ‘Take Five’ – with words. The group’s most recent LP, ‘BMX Bandits Forever’, came out on Elefant Records in 2017. 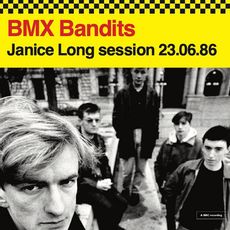