In the middle of their 1982 North American tour, Black Flag recruited former D.

O.A. drummer Chuck Biscuits to replace Emil Johnson. Biscuits traveled with the band for the rest of the tour while learning their songs in the process, readying them to begin work on the next album. What resulted soon after the tour's end was this recording of a demo session comprising entirely of new material; most of the songs of which were re-recorded for the subsequent albums "My War" and "Slip It In." Unfortunately, a lawsuit filed by the band's then-distributor, now-defunct Unicorn Records, led to a court injunction that kept the group from releasing anything under the "Black Flag" name. Several years passed before the lawsuit was finally dropped, leading to Black Flag's ambitious frenzy of releasing new albums and touring until their sudden breakup in 1986, yet never in that time officially releasing the 1982 demo session. Since then, it has been left to be bootlegged years afterwards in various forms and formats. These are the only known studio recordings to exist of Chuck Biscuits with Black Flag since he had been in the band for only several months of that year until the lawsuit. It's also the only known recording of the band playing the first two songs "What Can You Believe" and "Yes, I Know," both written by rhythm guitarist Dez Cadena. He later recorded these songs with his own band, DC3, after he left Black Flag around the same time as Biscuits, presumably due to creative differences with lead guitarist and bandleader Greg Ginn. 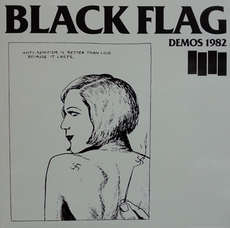