An access-all-areas book marking the 25th anniversary of the era-defining Oasis concerts at Knebworth, with stunning images taken by acclaimed music photographer Jill Furmanovsky - including contributions from Noel Gallagher and Alan McGee, and hundreds of never-before-seen pictures.

On 10th and 11th August 1996, Oasis played the concerts that would define them, a band at the height of their powers playing to over 250,000 people. Twenty-five years on, this is the inside story of those nights, told through the breathtaking photographs of Jill Furmanovsky, granted unprecedented access to Oasis throughout that summer. Also includes newly obtained first-hand accounts from the people who were there - including Noel Gallagher and Alan McGee - in text by award-winning author Daniel Rachel. From relaxed rehearsals and warm-up concerts to Knebworth itself - backstage, onstage, flying high above the site - many of the stunning photographs in this book have never been seen anywhere before. This the definitive account of two nights that a generation will never forget. 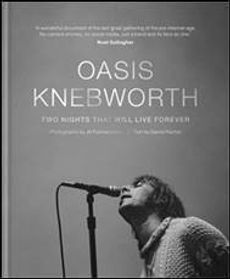