ITS 25 YEARS (THIS MONTH) Since the first Heads album was released.

. .so.. for 2021..Rooster has decided to get the album back in print on vinyl.. but changing the artwork. With some silver foiling and bordering, the single sleeve has been boosted to a sweet gatefold, Rooster also got the Radio 1 sessions from the time remastered, and re-cut along with the huge b-side to their Television 7” “Jellystoned Park”. So there you have it, a double vinyl silver jubilee reissue of a fantastic debut album! 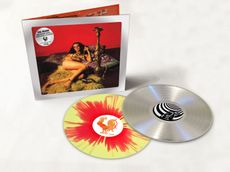