simultaneously old skool & fresh – this beauty plucks our nostalgic heartstrings whilst urging us to get out there & embrace newness again.

Shire T (AKA Chris Davids, one half of celebrated electronic duo Maribou State, who released their latest album ‘Kingdoms In Colour’ to widespread acclaim in 2018) is set to release his debut solo album ‘Tomorrow’s People’ on 20th August, arriving as the inaugural long-player on Maribou’s own Dama Dama imprint. As Shire T, Davids draws on darker, more club-ready sounds, citing a broad range of influences which manifest in a record he describes as “a celebration of british dance music culture, pulled from all the experiences and memories I’ve had in that world over the years.”

Having originally set out in early 2020 to work on new Maribou State music, the unfolding pandemic and abrupt change in circumstances led Davids to a renewed focus on his solo work. “I started feeling really nostalgic” he explains, “Sometimes you need a purpose to make music, something to work towards, but with this it was very much the opposite. It felt like the future had been erased and I ended up delving back into the past, into all the dance music that inspired me when I was growing up. It became a way to escape the madness that was going on at the time”

Tracks like lead single “Blue Kiss”—built around a TB-303 bassline and some classic drum machines—and album opener “Full Attention” wear their influences on their sleeves, building the pace early on with driving synth-lead rhythms in a nod back to 90’s rave. Elsewhere, tracks like “London. Paris. Berlin.” and “Serve No Tea” show off a gentler side to the record, the main piano refrains the result of a day spent tinkering on his old childhood piano. Regardless of the direction each track takes, Davids’ deft uses of melody and vocal samples keep everything tied together in a way that will feel both new and familiar to fans of his existing work.

Beginning life in 2017 as a way to create more club-ready tools for Maribou State’s DJ sets, Shire T soon became an important creative outlet for Davids, often seeing him carve out extra hours in the studio following Maribou recording sessions to work on the music. The project took on more significance as the pair began preparations for their ‘fabric presents’ release, resulting in two tracks—”Hackney Birdwatch” and “Gentlemens Whistle Club’—used to tie together the dancier-end of the various styles and tempos exhibited on the mix, which included new music from fellow Dama Dama label-mate North Downs, as well as new track “Mother” from Maribou State themselves.

Despite the period in which it was created, the album title ‘Tomorrow’s People’ serves as a more hopeful look towards the future, a time when dance music will once again ring out from club and festival sound-systems to be met by feet on the dance floor. 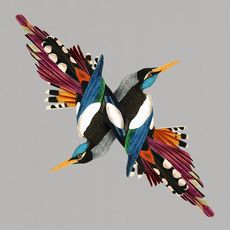