THE FILM SCORES ON PHASE 4

Celebrating the composer’s 110th birthday. All albums have been remastered at 24bit 96kHz from the original analogue master tapes. 7 original albums presented in original sleeves and programming. Features his classic scores for the Hitchcock films Psycho, Vertigo, North by Northwest and Marnie and other thrillers. His scores from Great Films such as Citizen Kane, Jane Eyre, the Academy Award-winning The Devil and Daniel Webster, The Snows of Kilimanjaro, and the sci-fi and fantasy classics Journey to the Centre of the Earth, The Day the Earth Stood Still, The Seventh Voyage of Sinbad, The Three Worlds of Gulliver, Mysterious Island and Jason and the Argonauts are all included. Also included his Herrmann’s score for the 1975 film Obsession, Brian de Palma’s homage to Hitchcock’s Vertigo. The booklet includes new liner notes from film music scholar and Bernard Herrmann expert Tom Schneller. 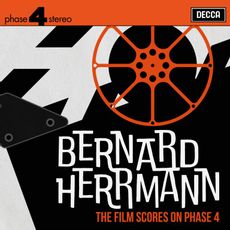