The magical Mega Bog returns with another fantastical off-world transmission, the most sophisticated, exploratory, and accessible statement yet from surrealist songwriter and avant-pop prospector Erin Birgy.

Featuring James Krivchenia (Big Thief), who co-produced, and Zach Burba (iji) among its cast of vibrant players, Life, and Another bristles with painterly technicolor surface textures while plumbing fathomless depths of feeling. Cohabiting with Life, and Another’s co-producer, engineer, and percussionist James Krivchenia (Big Thief) in a small cabin near the Rio Grande off of NM State Route 68, Birgy found herself often alone, suspended between their separate touring schedules. In these silent time passages, Birgy experienced a complete loss of self amid the expanse. Frequently thinking about death in the middle of nowhere opened a familiar black hole of troubling projections, and any desire to find freedom or remain positive continued to fold back into self-destructive thought and fear. New, northern landscapes, like the woods and rivers outside of Seattle, Washington, provided inspiration during odd sublets in the area. Dark as everything may actually be, Birgy always manages to stay with trouble and conjure the extraordinary resulting music. Recorded over several sessions in various studios Life bleeds with instrumental contributions from longtime and new collaborators, including Aaron Otheim, Zach Burba of iji, Will Segerstrom, Matt Bachmann, Andrew Dorset of Lake, James Krivchenia of Big Thief, Meg Duffy of Hand Habits, Jade Tcimpidis, Alex Liebman, and co-engineers Geoff Treager and Phil Hartunian. Listeners know by now they can trust Mega Bog to continuously lead them into deeper and wilder, spiritual pop territories. Skittering piano glissandos, haunting psychic background voices, and tequila-inspired improvisations creep and crawl over the dark-night-of-the-soul rock and roll dreamscape, before vanishing to make way for invocations of quiet clarity and living-breathing instrumental passages. Featuring James Krivchenia (Big Thief), who also co-produced and engineered the record, as well as Zach Burba (iji) and Meg Duffy (Hand Habits). RIYL: Laurie Anderson, Kate Bush, Kevin Ayers, Bridget St John, David Bowie, Cate Le Bon, Aldous Harding, Big Thief & Nico. 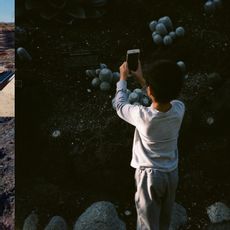