Within a year of her ground breaking Double Album “Bad Girls” Donna Summer left Casablanca Records to become the first Artist signed to the new Geffen Records label  The third album released for the label was 1984 ’s “CATS WITHOUT CLAWS” which was produced by Michael Omartian who followed up his production duties on “She Works Hard For The Money” by giving the album a mid 80 s dance/pop themed sound The album includes the singles ‘Supernatural Love’Love’,,‘There Goes My Baby’ and ‘  •“CATS WITHOUT CLAWS” reached the Top 30 in several countries across Europe, also becoming a Top 40 album in the USA and Japan  Michael Omartian’s production credits include albums with Michael Bolton, Peter Cetera, Christopher Cross, Amy Grant, Whitney Houston, The Jacksons, and Rod Stewart Alongside Quincy Jones, he co produced USA For Africa’s 1985 No 1 hit,hit,"We Are the World"  Donna won a Grammy Award for Best Inspirational Performance for the album’s final track,track,‘Forgive Me’ 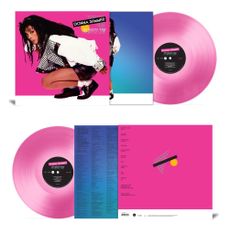