Heralded by critics as one of the best albums of the sixties, Happy Sad saw Tim Buckley exploring his jazz roots and combining them with his signature folky sound.

Released after the massively successful Goodbye & Hello, his third album was produced by Jerry Yester and Zal Yanovsky, who gave the album a loose, open sound, which makes every listen like a breath of fresh air. Once you get drawn into Buckley’s world, it’s simply a mesmerising experience. Two sides just don’t seem enough! 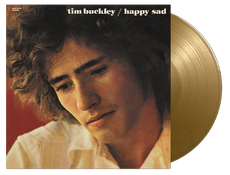