: At sunrise, stuck in the last floor of his apartment in Paris, with his elbow on the breakfast table, Rone sink into his dream and ventures into a Wonderland alternately fairy-tale and nightmarish.

Hard to find a better illustration than the video clip of “Spanish Breakfast” to introduce the melting relationship sustained by RONE`s music with imaginary realms. This first collaboration with French short-film boy wonder, Vladimir Mavounia-Kouka could only give birth to a Fantastic piece of work and a relevant visual metaphor for the daydreaming nature of this first album. After a first cut with Lucy on Curle last year, Rone signed a proper 12” on Agoria´s imprint InFiné. Ranking among his best supporters Massive Attack 3D, English superstar Deejays of the likes of Sasha, Lee Burridge and Dial´s or Border Community’s champions, his gliding Bora EP was a first tour-de-force, which reconciled electronic with indie amateurs. In everyday life, Erwan Castex is making soundscapes for exhibitions, adverts or short-films, but when he starts working on his own compositions, Rone becomes the guide of a enchanted world. 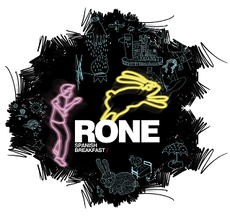