OSI AND THE JUPITER


On their fourth full-length album "Stave", Osi and the Jupiter provide listeners with a unique journey through the delicate sounds of what may have been believed to be long lost; allowing for a truly immersive experience that is informed by the innate mysticism still dwelling beneath the surface of their native Appalachian region of eastern Ohio.

The sounds explored on "Stave" seem simultaneously comforting and harrowing, as they confront listeners with a sonic palette they may at first consider foreign and detached from the comforts of the modern world. Upon allowing oneself to delve fully into these sounds however, listeners will inevitably come to realize that "Stave" provides access to a realm modern man may have forgotten, but that nevertheless lurks all around us for those willing to open their minds and ears. As such, the occasional vocalisations of Sean Kratz (vocals, guitars, synths) serve as an earnest expression of respite, accompanied by gently strummed acoustic guitar and atmospherics. However, "Stave" showcases Osi and the Jupiter's expanding and increasingly ambitious artistic expression, as they have managed to fuse the elements of their sound that listeners have become accustomed to since the project's inception in 2015 with diverse, expansive sonic depth, provided by carefully crafted synth work and further acoustic instrumentation. These elements are held together by Kakophonix's sombre cello performance and the highly expressive string work throughout the album, which regularly serve as the foundation upon which the more expansive elements are built. Throughout "Stave", stark rhythmic pulses provided by deep percussion and accentuated strumming patterns serve as a form of ancient pulse that grips the listener and draws him or her further into Osi and the Jupiter's world. In essence, this album serves as a soundtrack to times long forgotten and a form of spirituality that transcends conventional modern religion, allowing the listener to be transported to a realm they may have never been aware of, but that is nevertheless immediate and engrossing. The custom artwork for "Stave" serves as the ideal visual component for the audio journey Osi and the Jupiter have created. 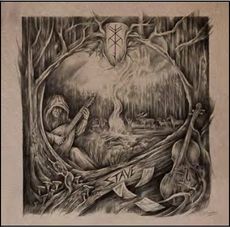