Follow us Follow us
Home  | paul morley - from manchester with love the life and opinions of tony wilson* (*aka anthony h. wilson)

From Manchester with Love The Life and Opinions of Tony Wilson* (*aka Anthony H. Wilson)

Whether signing a contract in his own blood, launching the careers of Joy Division & Happy Mondays, or helping to grow Manchester into a musical mecca, Paul Morley realises that Wilson’s story is intrinsic not just to Manchester but to the sonic landscape of this nation. Wilson left a daunting final request to his friend Morley to write this book – who better to tell his story after all? A man who was alongside him as a friend, cajoling & fighting tooth & nail every step of the way (to the point that he even disputes Wilson’s attendance at the legendary Sex Pistols Lesser Free Trade Hall show in 1976.)

Critically-acclaimed and bestselling author Paul Morley's
long-awaited biography of Factory Records cofounder
and Manchester icon Tony Wilson.
'When forced to pick between truth and legend, print the legend.' Tony
Wilson
To write about Tony Wilson, AKA Anthony H. Wilson, is to write about a
number of public and private characters and personalities, a clique of unreliable
narrators, constantly changing shape and form. At the helm of Factory
Records and the Hacienda, Wilson unleashed landmark acts such as Joy Division
and New Order into the world as he pursued myriad other creative
endeavours, appointing himself a custodian of Manchester's legacy of innovation
and change.
To Paul Morley he was this and much more: bullshitting hustler, flashy showman,
aesthetic adventurer, mean factory boss, self-deprecating chancer,
intellectual celebrity, loyal friend, shrewd mentor, insatiable publicity seeker.
It was Morley to whom Wilson left a daunting final request: to write this book.
From Manchester With Love, then, is the biography of a man who became
eponymous with his city, of the music he championed and the myths he made,
of love and hate, of life and death. In the cultural theatre of Manchester, Tony
Wilson broke in and took centre-stage. 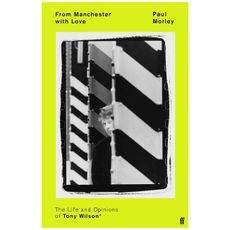