They were punk before punks, avant rockers before avant rock, noise before noise and their on-again/off-again career, which spanned the years 1967-1996, continues to cast a huge shadow across the psychedelic underground.

Between August 1980 and March 1981, Les Rallizes Dénudés (or The Naked Larrys, as the long-lost acetate they are rumoured to have recorded for Virgin Records in the mid Seventies dubbed them) played seven concerts in and around Tokyo. Never officially released, illicit nth generation cassette copies circulated in Japanese fan circles for many years, attaining a whispered, Holy Grail status amongst initiates to the Rallizes cult. High quality soundboard versions were finally released by the secretive Univive label in 2005. Three of the best of these concerts were collected on Double Heads (and now this 7xLP Set), all recorded at Yaneura, a small club in the teeming neon teen shopping mecca of Shibuya in Tokyo. Together these three concerts comprise a singular pivotal moment in Les Rallizes Dénudés development – Mainlining an elegantly wasted take on two-chord Avant garage that makes direct reference to Plastic Inevitable etr Velvet Underground with some of Mitzuni’s most beautifully decadent fuzz guitar as well as some of the most glacially psychedelic music of their long career. As the old ESP-Disk banner used to promise, truly, YOU NEVER HEARD SUCH SOUNDS 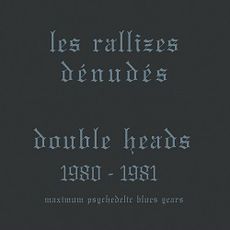