The classic debut LP by Dub Narcotic Sound System, originally released on K Records and unavailable on vinyl for 25 years.

The oddball indie-funk collective Dub Narcotic Sound System was spearheaded by vocalist Calvin Johnson, the former frontman of the legendary Beat Happening as well as the founder of the famed K Records label. Named in honor of Johnson's own Olympia, WA-based basement studio Dub Narcotic, the project was begun in 1994 with a rapid-fire series of funk-, rap-, and reggae-influenced singles including "Bite," "Fuck Shit Up," "Booty Run," and "Shake-a-Puddin'"; from the outset Johnson was the group's sole constant member, although over the course of subsequent releases, including the EPs Industrial Breakdown, Ridin' Shotgun, and Ship to Shore, the revolving lineup grew to include Olympia scenesters like Lois Maffeo as well as Larry Butler, Todd Ranslow, and Brian Weber, all three members of the hip-hop unit Dead Presidents. The first Dub Narcotic Sound System full-length, Rhythm Record, Vol. One: Echoes From the Scene Control Room, appeared in 1995; later efforts included 1996's Boot Party and 1998's Out of Your Mind. Sideways Soul, a collaboration with Jon Spencer Blues Explosion, followed in 1999. Trouser Press wrote that "when not delving deep into the usual sorts of ambient studio trickery, the songs hit a ’60s R&B stride, bathing in the stoned soul picnic ambience with uplifting spirit.” 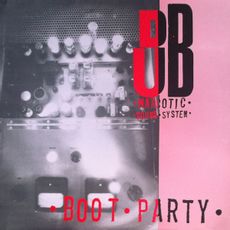