Where her previous works were an urgent, aching mix of punk, folk, and blues, 'moon pix' is truly soulful music: warm, reflective, complex, & cohesive. A brooding, ethereal & highly charged album, with marshall' guitar chiming & strumming up a peculiar melancholic night sky filled with spirits. legend has it that much of the album was written “in one deranged night” following a hallucinatory nightmare Marshall had in 1997 while alone in the South Carolina farmhouse she shared with then boyfriend Bill Callahan.

ami says : “i’ve fallen in love all over again with chan marshall’s intimate songs of anguish, recorded with the bare bones of accompaniment each song sounds like she is giving a piece of herself away – fiercely beautiful.” 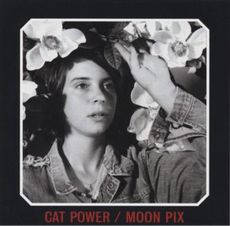