One of the very rare chances, and quite possibly the only chance to listen to the genius of Ennio Morricone engaging with the musical world of jazz.

His soundtrack for the film The Blue-Eyed Bandit (Il Bandito Dagli Occhi Azzuri by Alfredo Giannetti, 1980) is marked by a relentless rhythm that perfectly matches the atmosphere of the film. The film was shot in Genoa – one of the most iconic cities of the Italian detective (poliziottesco) film genre – and stars Franco Nero, one of the leading stars of the whole genre. The main theme, Città Viva, is a vibrant and metropolitan piece, beautifully arranged for big band + trio of soloists, hand-picked by Morricone himself; his friend and collaborator Enrico Pieranunzi (piano), Roberto Gatto (drums) and Riccardo Del Fra (double bass). This is one of the very few times in which Ennio Morricone, who was famously suspicious of jazz improvisation, asked his musicians to be free and improvise, adding their solos to the original structure – the solo viola of Dino Asciolla, one of the greatest violists of all time, in particular stands out. This is the first time the soundtrack has been released on vinyl since its original release in 1982 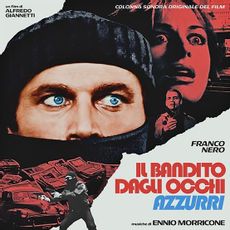