The Madness, originally released in May 1988, is the only album recorded by Suggs, Chas Smash, Chrissy Boy and Lee Thompson of Madness.

Calling themselves “The Madness”, the group explored a new direction without Mike Barson, Woody and Mark Bedford. The result was an album bathed in all the new technology the late 1980s had to offer, and features some of this incarnation of Madness’ most experimental work. Lead vocals were shared between Suggs and Chas Smash, while all members of the group contributed music and lyrics. The album also features a host of other musicians including Steve Nieve (Elvis Costello & The Attractions) on keyboards and The Specials’ Jerry Dammers on piano. Although short-lived, this version of Madness marked a significant detour from the original band’s trajectory and preceded one of the most extraordinary music comebacks ever witnessed, when the whole band reformed in 1992 for two sold-out “Madstock” shows in London’s Finsbury Park. The fans’ excitement led to a legendary mini-earthquake, and ‘Madstock’ would prove that no members of Madness ever truly leave the band. 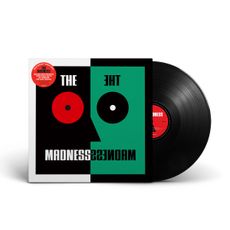