Ocean Rain continued the band’s use of strings, creating a dark, ethereal aura throughout the album.

It produced three singles, Silver, Seven Seas and the massive anthem The Killing Moon; a track frontman Ian McCulloch once stated, “I know there isn’t a band in the world who’s got a song anywhere near that.” It reached #9 in the UK singles chart, and continues to transcend generations to this day, routinely featuring in films and television shows such as Donnie Darko. The album’s iconic, atmospheric cover art was taken in the stunning Carnglaze Caverns in Cornwall by photographer Brian Griffin, who shot their three previous album covers. Ocean Rain went on to reach #4 in the UK album charts, being certified gold in the process, as well as charting in the USA. 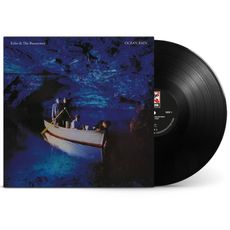