Fabiano Anthony Forte aka Fabian, actor and singer born in 1943 who was molded into a rock 'n' roller by the record company because of his good looks.

 Marketed as a combination of Elvis Presley and Rick Nelson, Fabian recorded a variety of fine rock numbers between 1958 and 1961, which Bear Family Records® has bundled together for the album in our 'The Drugstore's Rocking' series.  Fabian may not be a Caruso or Elvis Presley vocally, but his up‐tempo recordings positively sparkle with unbridled energy.  With hits like Tiger, Turn Me Loose and Hound Dog Man on this CD, Fabian landed on the Billboard pop charts a total of ten times, and even in the Top10 with these three numbers.  Fabian is accompanied by jazz and studio greats such as Earl Palmer, Plas Johnson, Peter DeAngelis and Al Caiola.  Detailed liner notes by Bill Dahl in the illustrated booklet. At least at the beginning, Fabian was the most reluctant teen idol in America. Bob Marcucci, boss of Chancellor Records, discovered 14‐year‐old Fabiano Forte on his front stoop in Philadelphia, worried sick about his father, who had just been hauled away in an ambulance. After some serious effort, Marcucci finally convinced the lad to try his hand at recording rock and roll. The pleasing results are on this jam‐packed collection. At first, Fabian was a work in progress behind the mic, but it didn’t take him long to start scoring smashes for Chancellor. I’m A Man, the Doc Pomus/Mort Shuman‐penned Turn Me Loose, Tiger, Hound Dog Man ‐ Fabian nailed one hit after another in 1959, and millions of girls squealed their approval. This comp isn’t limited to Fabian’s mammoth hits; he did some of his best rocking on his Chancellor albums, and there are plenty of eye‐openers here from those sets as well. Break Down And Cry, his lone ’62 single for Dot Records, is aboard too, produced by label boss Randy Wood and Pat Boone. Fabian’s rock and roll career was short but sweet; Bear Family’s deep dive into his surprisingly rich catalog is sure to please! 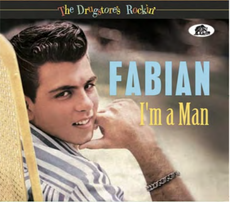